Google effect in and around the proposed Transit Village Project location 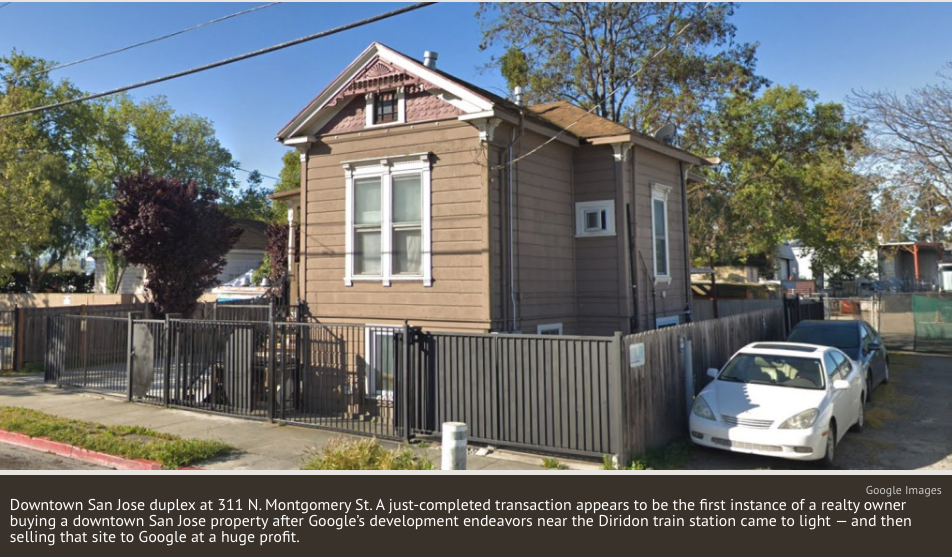 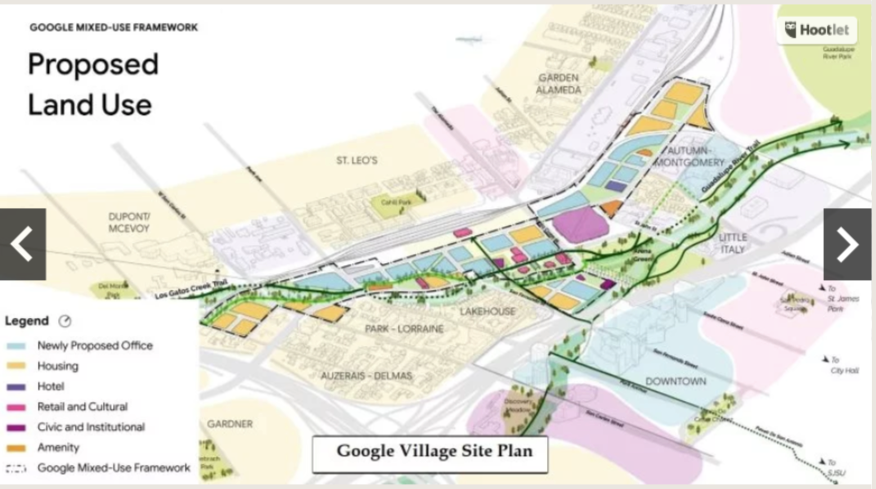 Google unveils its vision for the coming transformation 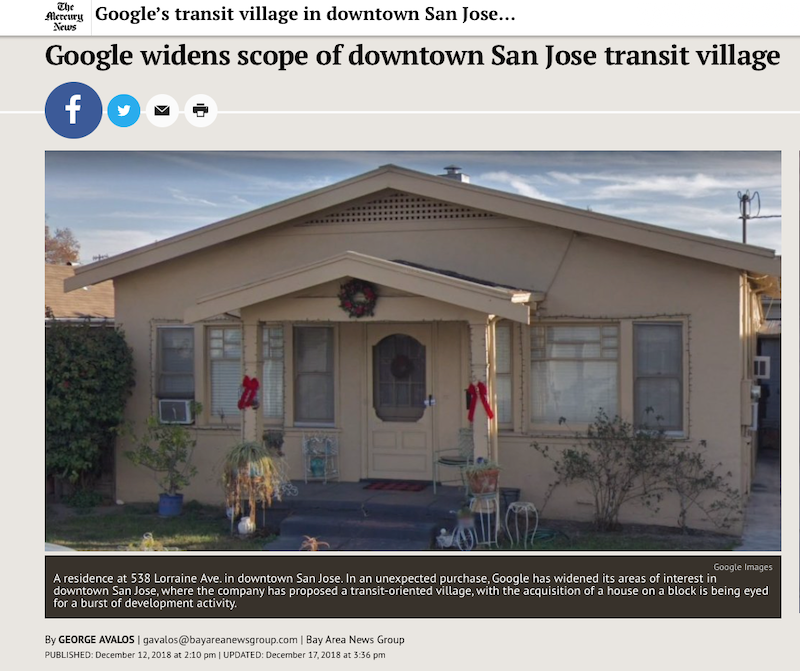 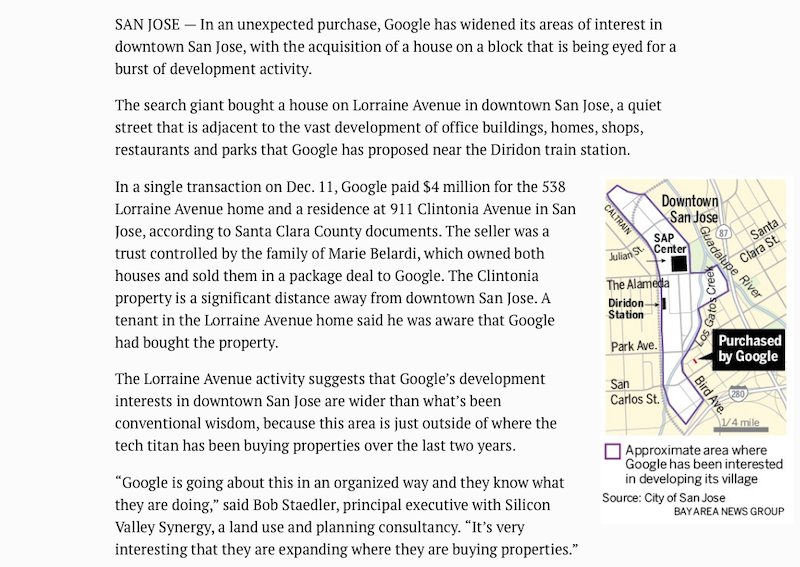 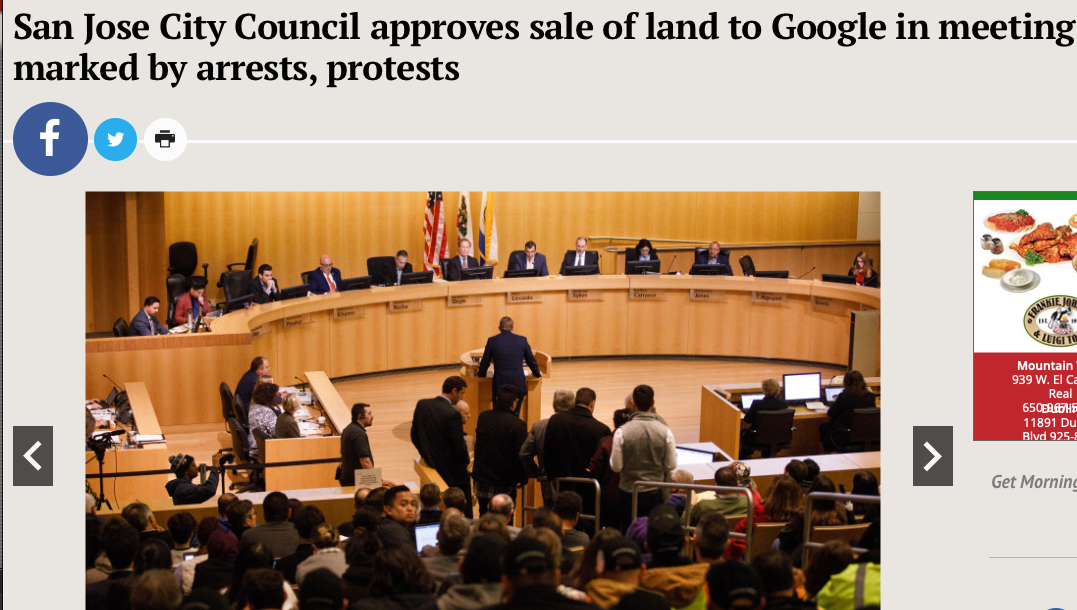 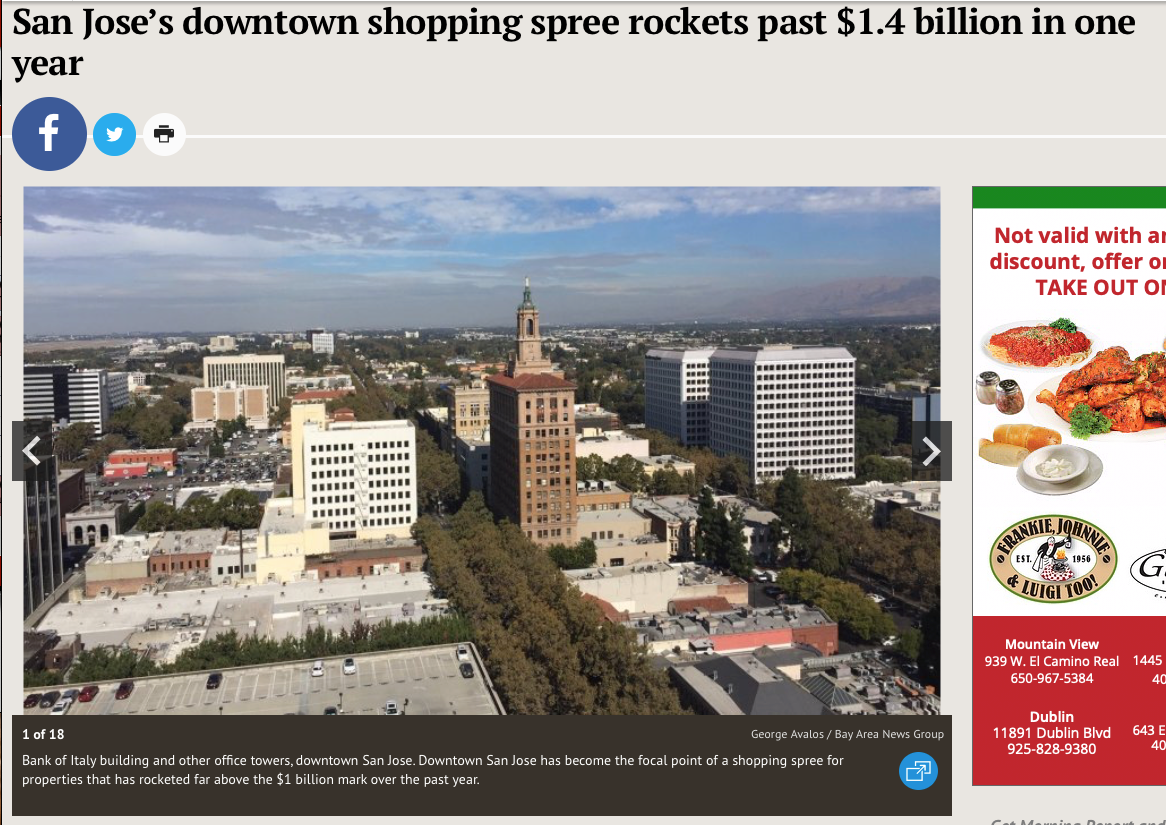 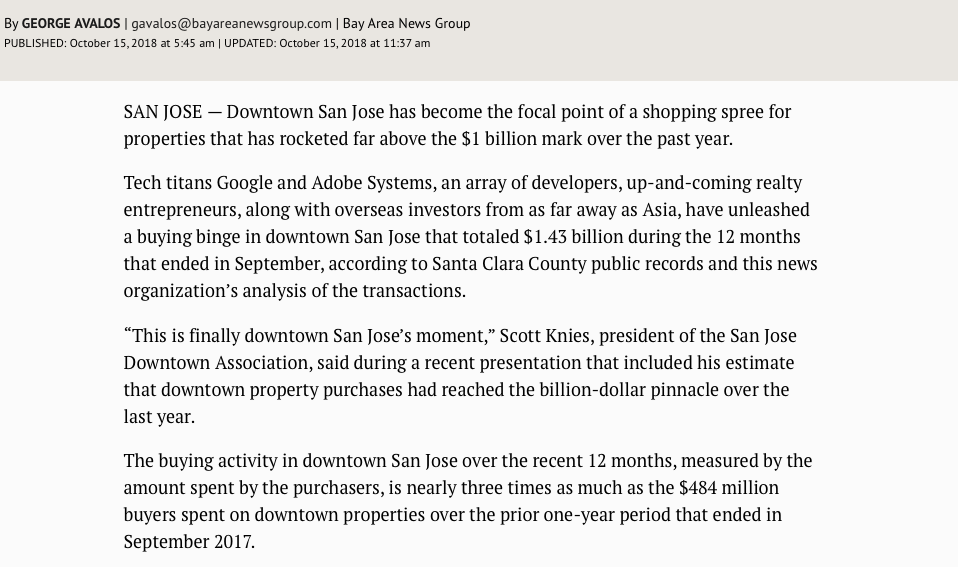 GOOGLE'S VISION OF THE TRANSIT VILLAGE 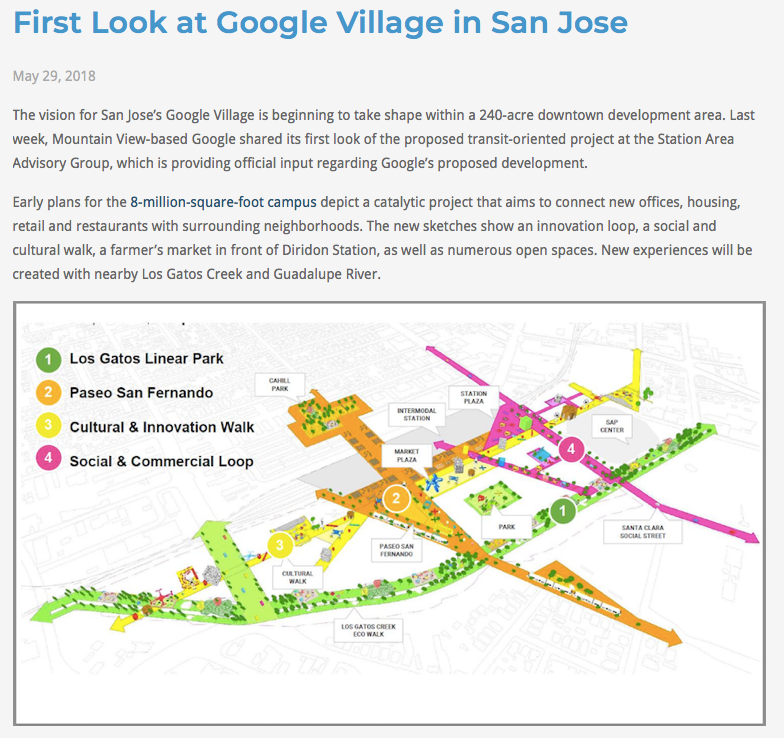 The City of San Jose and Google agree to pricing on 9 of the 16 parcels it agreed to sell to Google. 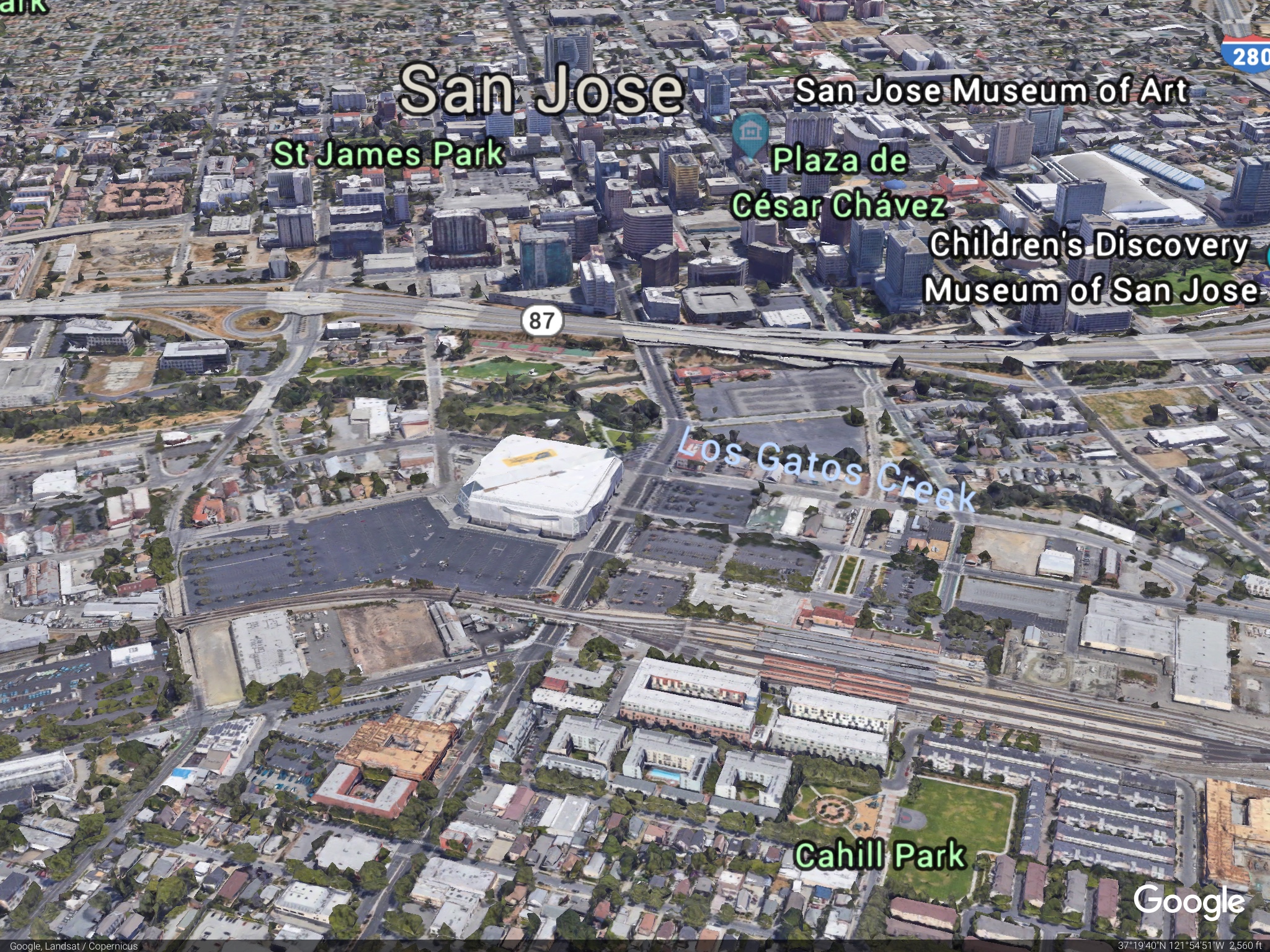 San Jose, known as the Capital of Silicon Valley, wants a tech mega campus near its downtown area like some of its neighbor cities.  Cupertino’s Apple just added the famous campus #2 and talking about building camput #3, Menlo Park has Facebook, Mountain View has Googleplex and Santa Clara’s Nvidia just completed its new building with plans to add another one. All these cities are benefitting economically from the tax revenue along with ancillary business build-outs associated with these mega campus structures.

With San Jose falling out of the running for Amazon HQ2 project, the imporantance of this project to the City of San Jose cannot be overstated politically and economically.  20,000 high paying Google jobs.

The City Council of San Jose voted - near unanimously - this summer to agree to sell Google 16 parcels of land owned by the city to permit the latter to build it’s new transit village adjacent to the Diridon Station and SAP Center. The project envisions between 6-8 million square feet of office space to house up to 20,000 Google employees (4x size of Apple Campus) and to accomplish this goal, the company must compile nearly 240 acres of land, which it already has been secretly working to accumulate.  The agreement with the city has made that herculean task much easier to accomplish.  San Jose wants a technology hub in the downtown area to revitalize it and the surrounding neighborhoods. 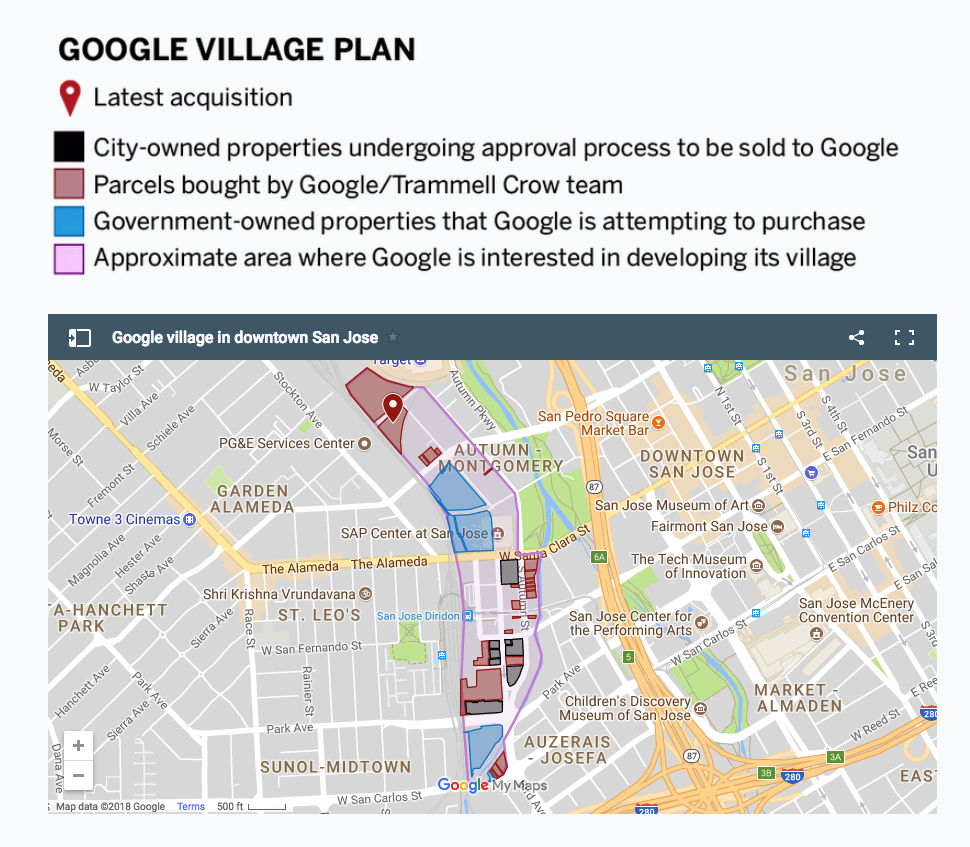 Since the announcement of the deal with the city, commercial real estate around the downtown area has boomed with Google's real estate agency snapping up parking lots and industrial buildings.

That amount does not include the 16 acres the city has agreed to sell to the company. This is not just a plan, they spent more than $150M in secret to buy the land like Apple did in and around Cupertino.  Other players are coming into the area as well, like Adobe announcing its plans to add an additional 3,000 employees in it's downtown campus, more than doubling capacity there.

Amazon's R&D division, Lab126,  leased two floors of a popular downtown office buidling to make their presence known in the area as well. Affordability of space in the area makes downtown an attractive destination for many local companies.

In anticipation of the Google Transit Village going up, the city of San Jose is out there buying up more parcels to help with replacing and adding roads that will be needed to connect to the freeways and major throughways.  BART is also slated to tunnel through downtown San Jose in the coming years and connect to Diridon Station to make commute from other areas to downtown and Google Campus more efficient.

With the prospect of the Google effect near downtown, residential housing is also coming to meet the demand of anticipated expansion.  In November alone, there have been announcements of roughly 1,500 new residential units of various configurations in and around the proposed area to be built for the coming activities in downtown. There is no turning back on this push for development in downtown regardless of the news of Google.  Downtown is the only area left with large parcels of land available for conversion to residential housing to meet the pent up demand.

This new downtown transit project is not just another mega campus going up, it is a reimagingation of how urban housing will look in Silicon Valley in the coming years.  A new trend towards the city and away from the suburban life that has been the norm of Silicon Valley so far.  Whatever it may turn out to be, one thing is for certain.  Prices for properties near downtown and around this project will certainly skyrocket as time goes on.  The land grab for downtown San Jose has just begun.

Is this the right time for you before everyone starts talking about it?

Many Silicon Valley residents missed out at the opportunity to purchase in and around the Apple Campus 2 area before construction began and saw home prices more than double. Now is the time to get in before the prices become out of reach and more and more buyers focus their attentions to this area.

Contact us to learn more about the project and the impact of prices in and around the area.

The data relating to real estate for sale on this website comes in part from the Internet Data Exchange program of the MLSListings™ MLS system. Real estate listings held by brokerage firms other than MLSListings Inc are marked with the Internet Data Exchange icon (a stylized house inside a circle) and detailed information about them includes the names of the listing brokers and listing agents. The broker providing this data believes the data to be correct, but advises interested parties to confirm all information before relying on it for a purchase decision. The information being provided is for consumers' personal, non-commercial use and may not be used for any purpose other than to identify prospective properties consumers may be interested in purchasing. © 2020 MLSListings Inc. All rights reserved. http://www.mlslistings.com/

We're always available to help out, get in touch with us any time, or shoot us an email.

Thank you for contacting us, we'll get back to you shortly.

Sorry, we are unable to send your message at the moment. Please try again later.