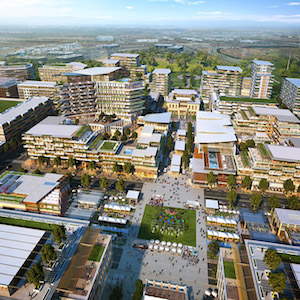 Related California's Santa Clara Project has been in talks and waiting on various approvals since 2013.  It had been the largest project in Santa Clara County but has since been over-shadowed by Google's Downtown Project.

The latest Urban Village concept project will likely start construction in 2019.   For those who have not been following this is a massive project that encompasses 240 acres of land that includes the current Santa Clara Muni Golf Course which is located directly across the street from Levi's Stadium.

Some of the particulars:

The ground breaking announcement certainly bring attention and demand back to this project which has been on hold due to the City of San Jose's Challenge to the project's Environmental Impact Report which was recently denied.